Inside Story features essays, journalism, commentary and reviews by leading writers and researchers. With permission, Inside Lives publishes relevant Inside Story biographical features.

The Australian Dictionary of Biography is looking for help in filling the gaps where notable women should be. 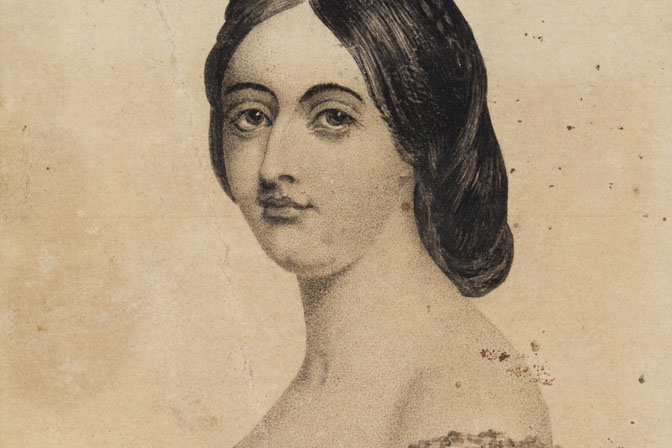 In her own right: detail from an 1856 portrait of naturalist and artist Harriet Scott (1830–1907). State Library of New South Wales

The frustration is about how a well-oiled machine can be changed. In 2008, I took over from Di as general editor of the ADB. It had been in existence for almost half a century, working very smoothly and effectively to commission, research, edit and publish successive volumes. While a salaried team of research editors, based at the Australian National University, manages the work process, volunteer members of the state and thematic working parties (the armed forces working party, for example) choose the subjects for inclusion.

When I arrived, seventeen volumes of entries, plus a supplement volume of “missing persons” entries, existed. So did a two-volume biographical register of subjects who had just missed out on ADB articles, as well as a number of spin-off books that had already been published to great fanfare. In 2006, all the ADB entries were published online. These entries now attract sixty million hits a year.

The autonomy of the working parties means that there can be quite a degree of variance in the sex balance in the lists formulated for ADB entries. Some working parties nominate nearly a third of women for entries, others only a fifth. The theory is that it will all work out in the wash.

Of course, it hasn’t really worked out that way. Women – like Indigenous Australians, Irish Australians and working-class Australians – are under-represented in the ADB. Overall, women account for only 11.6 per cent of entries. That’s about average internationally. The Dictionary of Canadian Biography, which started at the same time as the ADB, has about half the proportion of women we do – only 6 per cent. Women account for 10 per cent of the entries in the Oxford Dictionary of National Biography. The American National Biography Online, which has about 14 per cent women, is more balanced; the Dictionary of New Zealand Biography is even better, with 26 per cent women.

All general editors are aware that their dictionaries are not telephone books and need not reflect exact, albeit changing, demographic proportions. But what is the right proportion? And what does it mean to be a national biographical dictionary?

Right from the start, the ADB has prided itself on its broad range of subjects. As well as prime ministers, governors, bishops, captains of industry, artists, sportspeople and army generals, it has included actors, artists, pastoralists, prostitutes, bushrangers, murderers, architects and dress designers. It is also includes rabbiters, football barrackers and landladies.

Yet we do not have even one entry based on a woman who died from a botched backyard abortion, or an entry about a low-paid rural or urban mother left to bring up her family on her own. Should we have entries for these and other representative women? That question is slightly more problematic now that our focus is online and we can tell which entries people are consulting most often. Not surprisingly, it is the prominent people – prime ministers, sportspeople, artists – who are searched for most regularly.

In 2005, when Chris Cunneen, Jill Roe, Beverley Kingston and Stephen Garton published the supplementary (missing persons) volume of the ADB, they made a concerted effort to include a high proportion of entries on women and Indigenous subjects. But women still make up only 4 per cent of the entries for those who flourished during the colonial period. That is a woeful figure.

The ADB joins other projects with such concerns. Between 2010 and 2013, the historians Pat Grimshaw, Shurlee Swain and Judith Smart developed The Encyclopedia of Women and Leadership in Twentieth-Century Australia. While this is a wonderful online resource, few of the women born in the nineteenth century included in that project – such as Mary Lee (1821–1909) and Maybanke Susannah Anderson (1845–1927) – were not already in the ADB.

Further afield, Wikipedia has held an edit-a-thon themed around art and feminism to combat its “well-documented gender gap by improving, however incrementally, its coverage of women in the arts.” Various efforts to continue this initiative took place on International Women’s Day 2017. The ADB, by contrast, is interested in all representative and significant Australian women.

To improve the gender gap of the ADB, we have decided to add 1500 new entries for women active during the colonial period. A group of editorial board members – including Carolyn Rasmussen, Joy Damousi and me, together with Pat Grimshaw – have formed a group that will soon develop into a working party. In true ADB working party style, we are drawing up a list of possible inclusions. We currently have 650 names. We will shortly be making the list available on a Facebook page dedicated to the project.

Some of the women so far suggested are Mary McLaughlan (c. 1804–30), a Scottish convict who was the first woman to be hanged in Tasmania after she was convicted of killing her newborn infant; Mary Allport (1806–95), an artist who exhibited a chess table with wildflowers painted in the squares at the Exposition Universelle in 1855; Barangaroo (?–1791), an Eora Aboriginal woman who was a powerful figure in Sydney’s early history; and naturalists and artists Helena Scott (1832–1910) and Harriet Scott (1830–1907), who are minor entries in their father Alexander Walker Scott’s (1800–83) ADB entry but deserve their own entries. •

If you would like to nominate women who flourished in the colonial period for possible entries in the ADB, please email ncb@anu.edu.au for a copy of the template. The ADB has been recently successful in attracting Australian Research Council funding for an Indigenous Australian Dictionary of Biography, which will add 200 Indigenous subjects.

The thought of it

Music – my most profound experience

Barry Jones on Music as his most profound and consistent, intellectual and emotional experience. [...]